Been itching to get out with the Glamorgan Fungus Group ever since it was reformed back in April 2014. Not only for the fungi but a chance to find new sites for Malacolimax tenellus and anything else that came my way. Work and other commitments had always got in the way until a meet at Caerphilly on 31/10/15.

The well attended group gathered in the car park just off Van road; from here we headed off south over into Wern Ddu. Almost immediately on entering the wood I spotted a small clump of Hypholoma fasciculare (Sulphur Tuft) growing off some moss covered logs, the logs looked to have been lying there for sometime. I went over to investigate further to make sure of my identification and to see what else was to be found. While here I decided to peel back a small section of moss from the top of one of these logs and was immediately presented by a small bluish slug. It wasn’t until I picked it up that I noticed it had a small shell on its rear, yes I thought, finally found a shelled slug. On closer inspection I noticed that the shell was coiled and not finger-nail like, it didn’t look like anything I’ve noted as being found in Britain before. The realisation of me finding something new to Britain was slowly sinking in but didn’t want to broadcast it to the group, as I first wanted to make sure. Another member of the group Martin Bell came over and examined the find, he too didn’t recognise it. So I quickly managed some photos and placed it in a pot.

When I got home I immediately trawled through various on line resources and quickly came across Daudebardia. Checking through AnimalBase I saw that they have 14 species listed for that Genus and D. rufa looking to be the most common. Getting all excited I sent an email with attached photos to Ben Rowson to ask for his expert opinion. I also posted an enquiry on Pan Species Listing Facebook group, to which Malcolm Storey agreed that I was on the right track with Daudebardia. 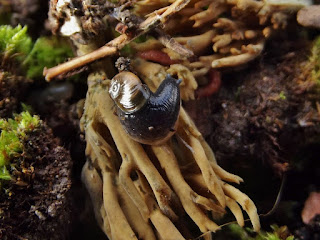 Me, Ben Rowson and Karen Wilkinson have been back on several occasions to search for more, with great success. It can be readily found in the immediate area of first find, getting slightly more elusive further out. Ben has confirmed it as Daudebardia rufa...more about it in the Journal of Conchology pages 119-121 publish on Friday 5th February 2016.